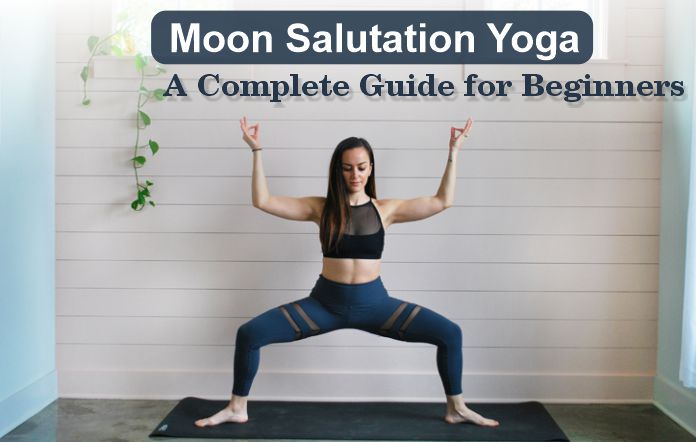 Moon Salutation Yoga-The Moon Salutation, known as Chandra Namaskar is a series of yoga asanas done to pay respects to the Moon. The Moon also represents the feminine side of the sacred energy in your body. This yoga exercise is also introduced in the Yin yoga to bring down the energy and balance it.

Chandra Namaskar is a cooling and quiet yoga practice as it channels the feminine energy from the moon. On the other hand, Sun Salutations are active as these channels the masculine energy of the sun. Do you know the muscles that benefit the most from this soothing yoga technique? Yoga experts have come up with a small guide to help you understand all about Moon Salutation yoga.

Let us first focus a bit on the muscles that moon salutations benefits.

Moon salutation provides a host of benefits to the following muscles:

But, wait! There is a lot more than practicing moon salutation yoga does to help you.

Chandra Namaskar has numerous variations. It comprises a total of 14 poses that are simple to practice.

With that said, given below are the major benefits of doing the Chandra Namaskar asanas in a flow;

Daily practice of Moon Salutations opens up the hips. It also increases flexibility by stretching your hamstrings, pelvis, buttock, and quadriceps muscles.

Do you know that Moon Salutation yoga has a vast impact on the seven Chakras? Yes! The hip opening and forward bend pose to stimulate the first three chakras. With backbend and opening of arms and shoulders, you stimulate the fourth and fifth chakra.

Finally, the last two chakras are stimulated by the forward and side bends. In other words, with each body posture, you remove any blockages to the flow of the sacred life force energy.

The variation in Moon Salutations opens the heart by stretching your shoulders and arms.

That is not all. There are still a few considerable differences between the two. Read further to know.

As the name suggests, you practice the Surya Namaskar during the time of sunset or sunrise. On the other hand, the Moon Salutation yoga is done at night or when the moon is visible.

Surya Namaskar or Sun Salutation is a part of Yang yoga. The Moon Salutation yoga is part of Yin yoga. Yang increases the energy whereas Yin cools down the body and mind.

You practice Sun Salutations by facing the short end of the yoga mat. On the other hand, Chandra Namaskar is done while facing the long end of the mat.

Sun salutations are done at the beginning of every yoga session to prepare your body for the asanas. On the other hand, you do the Moon Salutation yoga at the end of the yoga session as it cools down the body.

However, there are a few precautions to keep in mind when doing the Chandra Namaskar.

Given below are a few easy-to-follow precautions to reap maximum benefits from the practice of Chandra Namaskar:

There it is! Your guide to practicing the Chandra Namaskar without risking an injury to your body.

The Moon Salutation is a compilation of 14 yoga asanas. It is the best way to get in touch with the feminine side of the sacred energy within. You should join a certified yoga school to learn and practice this yoga sequence under the guidance of skilled yoga teachers.