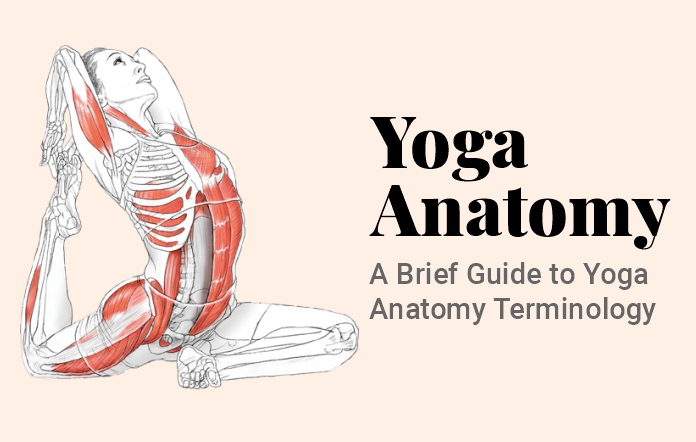 Yoga Anatomy:- When it comes to yoga practice, you should have deep knowledge about your body. That means you should understand the basic concepts of yoga anatomy. Then only you’ll know which part of the body or limb is focused when you practice a certain pose. You should be familiar with various yoga anatomy terms used while practicing yoga.

There are plenty of reasons as to why you should be aware of basic yoga anatomy terms. Keeping that in mind, we have curated some yoga anatomy terms that are commonly used in yoga practice. Make sure you read till the very end.

The Sacrum and Coccyx are two major parts of the Pelvis. The Coccyx is also known as the tailbone. Further, the Pelvis consists of two hips bones as well. In the initial stages of life, there are three hip bones – Ilium, Ischium, & Pubis. However, they fuse as you grow older.

The triangle-shaped bone at the base of your spine is Sacrum. The Ilium bone joins to the side of the Sacrum bone and is known as Sacroiliac Joint. It is most commonly known as SI joint in yoga anatomy that is an area prone to injuries.

It is one of the most complex joints in yoga anatomy. Further, the shoulder joint consists of Scapula, Clavicle, and Humerus. The Humerus joins the elbow joint where two bones the Radius and Ulna meets.

A cup-like structure known as Acetabulum is formed with the three hip bones. Further, the thigh bone has a ball-shaped head on the top that is known as the head of the Femur. This head fits into the Acetabulum and creates a hip joint.

The Femur has another joint at the kneecap known as Patella. Moreover, the shin bone joins the ankle at the Tibia and Fibula joints.

In simpler terms, Anterior signifies the area close to the front portion of the body. The Posterior denotes the rear or back part of the body. Concerning the usage of these terms in yoga anatomy, this is used in the context of Pelvis.

Anterior or Posterior Pelvic tilt is the way you move your Pelvis bones. It creates a huge impact on the way you practice yoga.

Anything closer to the torso is referred to as Proximal. Whereas, Distal signifies being away from the torso. For instance, the wrist is the Distal part whereas the elbow is the Proximal part of the forearm.

The motion in which two bones are brought towards each other is known as Flexion. Similarly, separating or moving away from the two bones from each other is an Extension. For instance, hugging your knees to the stomach is flexion. However, a straight leg is an extension.

Bringing the front of your bone to the center of your body is an internal rotation that is commonly used in yoga anatomy. They are easier to do and releases stress from your joints.

The movement of the front part of your spine away from the center of your body is external rotation.

The above-given are just a few yoga anatomy terms frequently used in yoga practice. Make sure you read them in greater detail to have a deeper understanding of the matter. This further helps you have the best yoga experience.